hace 2 años en Facebook
My friends and I ate here Friday 27th October. From the warm reception and being looked after all evening to divinely tasting and presented food that burst with flavour in your mouth, this was an amazing experience. Definitely lived up to and surpassed expectations.

hace 2 años en Yelp
Came for the 30 GBP Friday lunch. It was a good experience with good food and service. The main course fish was prepared well but a bit too salty. The smoked mackerel starter tasted like it could have been fresher and better quality. Overall, good but not great.

hace 4 años en Yelp
Belfast's newest Michelin star restaurant, and only the second after Ox sets the bar high with food, drink, and ambiance. Getting a table is a tricky affair, but if you are willing to wait a while, you can get one far out. Entering through the attached Dean's Fish restaurant, there's a definite feeling of having arrived when getting to the upscale EIPIC portion through another door. The bar and small tables are great for a pre dinner drink with several cocktails and bubbly drinks available. After moving to the table (they only have about 10 and do only one seating a night per table because of the length of the tasting menu), food begins arriving. There is an option of either a 40 pound menu or 60 pound which are largely the same with a few additions on the 60 pound one. You can also add a wine pairing with glasses or interestingly, shots (about half a glass) with each dish. We opted for the 60 pound menu and did shots until we got to the big full bodied reds toward the end and switched to full glasses. Each wine was carefully selected by the great and personable sommelier who served each and told us about them as well as why they were selected. The Rioja was pure perfection in a glass. The food was stellar from start to finish. Each course built a little upon the previous and got more flavorful and heavier. Everything was quite light though and even after 10 or so courses and cheese, the feeling was more pleasantly filled than overstuffed. The onion and cheddar bites served as an amuse bouche and got the party started. They were nice and crispy with just a hint of an onion and cheddar bite that didn't overwhelm the prosecco or subsequent dishes. The artichoke and black garlic foam was creamy and fragrant without being overpowering again. The bread and butter was out of this world good with a nice crusty crunch and slightly salted butter, all obviously freshly made. The egg yolk with pork cracklings was probably the least favorite dish as it was a bit salty and the large yolk was a bit too much of the eggy texture. The cracklings were delicious though and the tiny mushrooms were playful. The sea bass, dill, and hollandaise was a nice transition from light appetizers into the bigger entree courses. The dill and hollandaise was filling but herby in a fresh and seasonal way. The fish was extremely tasty as well but the sauce and dill really brought out the flavor. The halibut was almost more of a steak as it was served as a standalone filet seared to perfection. The "bone" sauce added a nice heavier flavor to the meaty fish and went very well with the heavier veggies like cauliflower. I need to find their cauliflower supplier as it was the most unique I've seen with color packed red and purple pieces and tiny miniature versions as well. The partridge served as the poultry course and was memorable for the bold move of adding little shavings of crisped black pudding to it. It was also served in a tasty "partridge" sauce with cabbage. The meat was succulent with both a breast and thigh with ample meat. The venison was without a doubt the best course and probably the most traditional. The meat was a succulent rare cut with a beautiful sear and amazing coloring. It tasted even better than it looked and truly melted in the mouth. The pears were a nice citrus compliment to a heavy course and the pureed sauce added some more airy texture. An incredible cheese plate followed with about 8 selections of various soft and hard cheeses including goat, local, and several french varieties. Each was exceptional and while it was hard to choose a favorite, I think I preferred the goat cheese the best for its smooth creaminess. A spiced apple slice with a crispy honeycomb was the first dessert served and the classic apple and honey flavor was off the charts. The chocolate and chestnut cake with toasted milk was next and as a chocolate and ice cream lover, this one hit home with me. The complex flavors of dark chocolate and chestnut were extremely rich and satisfying at this point in the meal. Last was a crispy cracker with raspberry jam and almonds, a great dessert and palate cleanser. If the mark of an exceptional dining experience is not wanting to leave, EIPIC achieved this as we were the last ones still in the restaurant, staying until 1am because the experience was so satisfying. Definitely an amazing treat and worth the splurge for a night to remember. 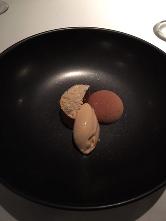 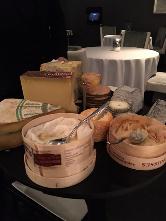