hace 12 meses en Yelp
It wasn't bad, it was A-Ok. It was slightly better than average bar food, but in the end, it's still bar food. We were in the area and meant to go to the diner located at the end of the plaza this establishment is located in, but it was inexplicably closed. We walked next door to Mr. Empanada, but quickly decided that there was nothing there that my daughter would eat, so we walked a bit further down to House of Brews. I was a bit worried that it may just be a bar, but they had high tops and booths, and there were other families there and no lushes at the bar day drinking. No offense to anyone that day drinks, I used to do it all the time, but I'm just old now. Anyways, we sat down at a booth, and the waitress came to get our drink order, Lemonades all around in case you care. I'm not sure what's up with their booths, it's like the tables that are in the middle of the booth were supposed to be a few feet wider, but something happened, and they just slapped these tables in there as a plan B. There was several feet between me and the table on my side, and several feet between my wife and child on their side. I could have pulled the table closer to me, but then they would have been six feet away from the table. I know it's a weird thing for me to complain about, but it was seriously inconvenient and uncomfortable to dine that way. Although I wasn't day drinking, I did take a peek at their beer menu. The pilsners and lagers were dominated by crappy bud light, coors, michelob with the most exotic being yuengling and stella. The IPA weren't much better, but the wheat, porters, and stouts were on point. I ordered buffalo shrimp as an appetizer, and they were just ok. I ordered the Quesadilla Burger as my main, and it was pretty tasty, they even cooked it medium rare for me. All in all, not a bad experience by any means, but it didn't blow my socks off either. 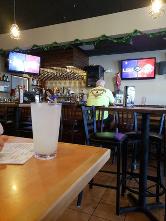